I am admittedly a creature of habit and I usually don’t branch out from my regular wardrobe of tried-and-true body shapers, but I decided to give Kim Kardashian’s shapewear brand, SKIMS, a try to see if it’s really worth the hype.

TBH, I’m typically pretty skeptical of the quality of celeb brands, but I have to admit that I was pleasantly surprised with how effective and comfortable her shapewear brand is! I also love that SKIMS offers all shades of “nude” so you can match your shapewear to your skin tone no matter how fair or dark your skin is. They also feature a wide variety of options and different cuts including high-waisted underwear which I prefer when I’m dressing for a special occasion.

I realllllyy love the shaping underwear and body shapers I tried including the SKIMS Sculpting Seamless Bodysuit and Sculpting Seamless Shorts. The bodysuit is perfect to wear under a dress or even with a tee and jeans. It does a good job of smoothing my stomach area which is my main concern. I think the shorts are great too and a good option if you don’t want to deal with getting completely undressed every time you go to the restroom.

Kim Kardashian’s SKIMS brand also carries interesting solutionwear in addition to the traditional body shapers like I tried. Some of the great options include these asymmetrical shorts for dresses with high slits and this body tape that can be used in place of a bra to both support and conceal when you’re wearing a revealing top or dress.

Want to try these SKIMS brand body shapers for yourself? You can grab your own pair of SKIMS by shopping at Skims.com or Nordstrom.com.

[This post was sponsored by Nakturnal, but all opinions are my own.] 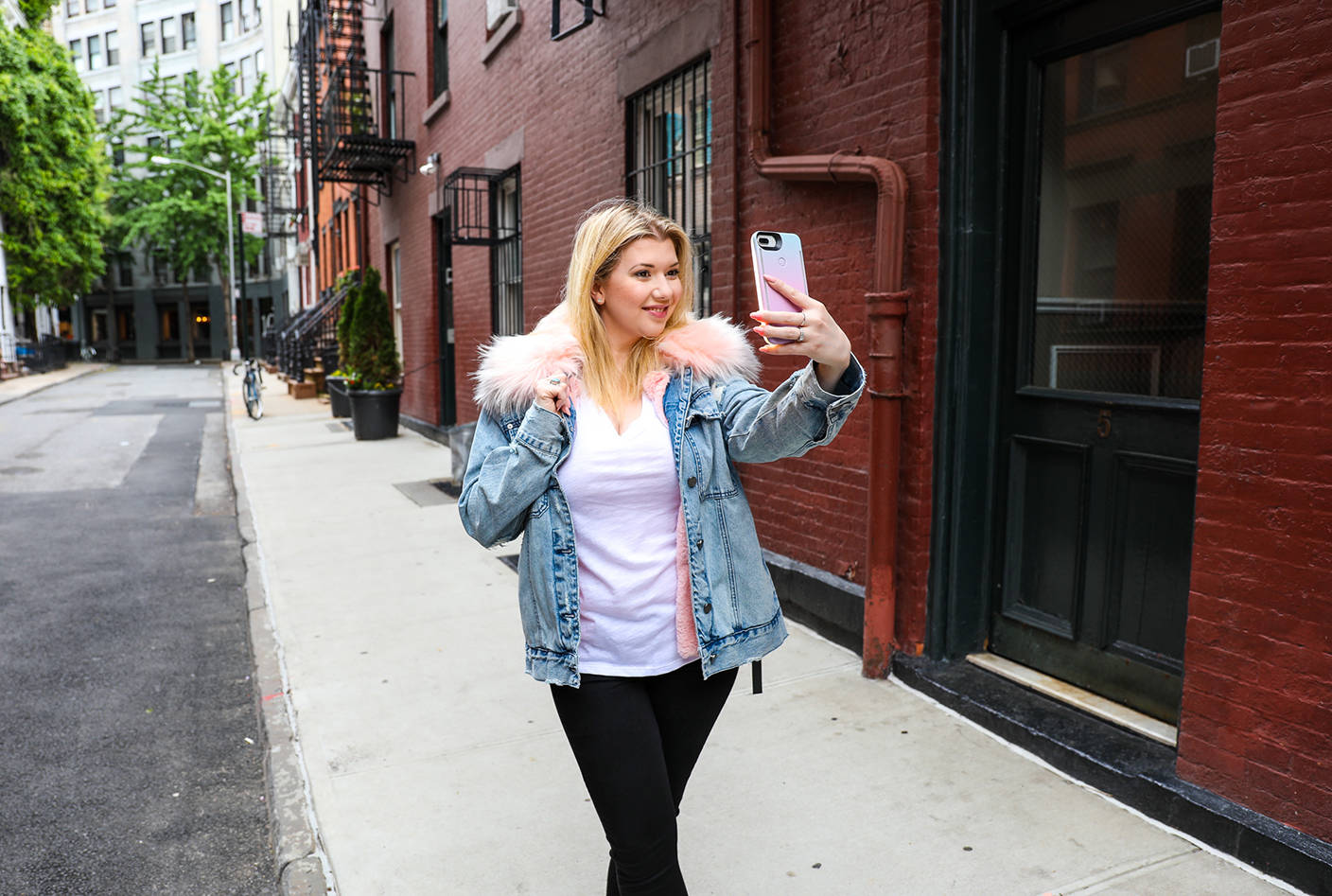 Ready to up your selfie game? I just got a new illuminated case for my new iPhone 8 Plus from my friends at Lumee! It’s most definitely the best light-up phone case I’ve tried.

I’m also living for the Cascade Duo style I picked! It features really pretty pastel blue to pink ombre fade coloring. The battery life of the light is pretty impressive and it lasts about two hours. It also comes equipped with a micro-USB cable to easily recharge the battery when needed.

Want to see it in action? I tested it out in an extremely low light area to show just how powerful its selfie-lighting powers are. Take a peek below to see what selfies look like with and without the Lumee light: 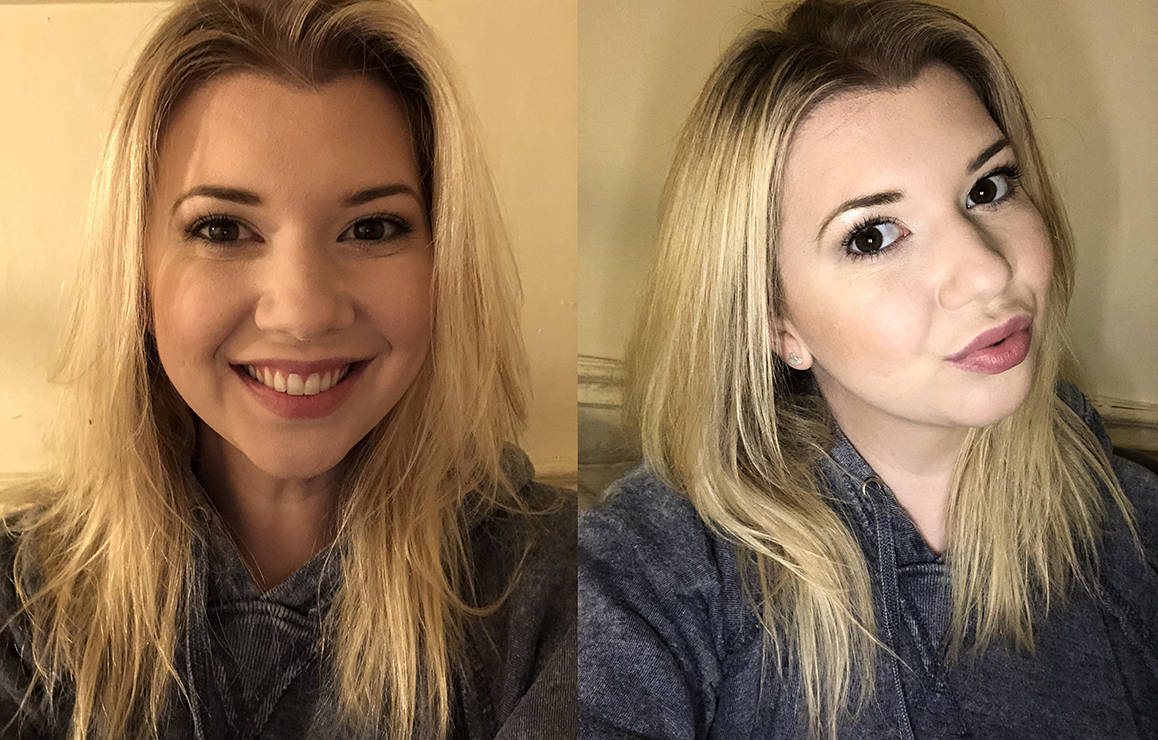 So good, right? It’s great for taking pics at night, too! And because I got the Cascade Duo, it also features external lights to shine in front when shooting photos with the traditional forward facing camera. Check out more info here and get ready for your best selfies yet! 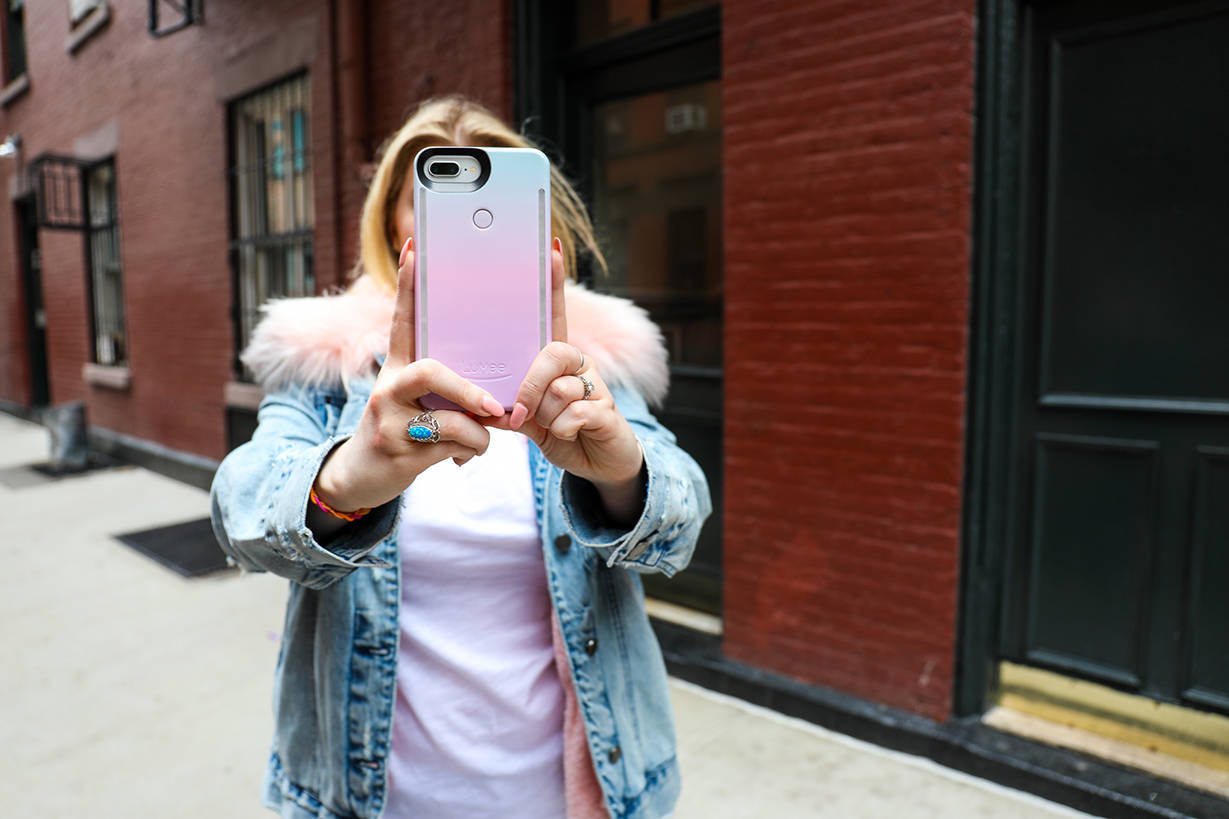 [This post was sponsored by Nakturnal, but all opinions are my own.] 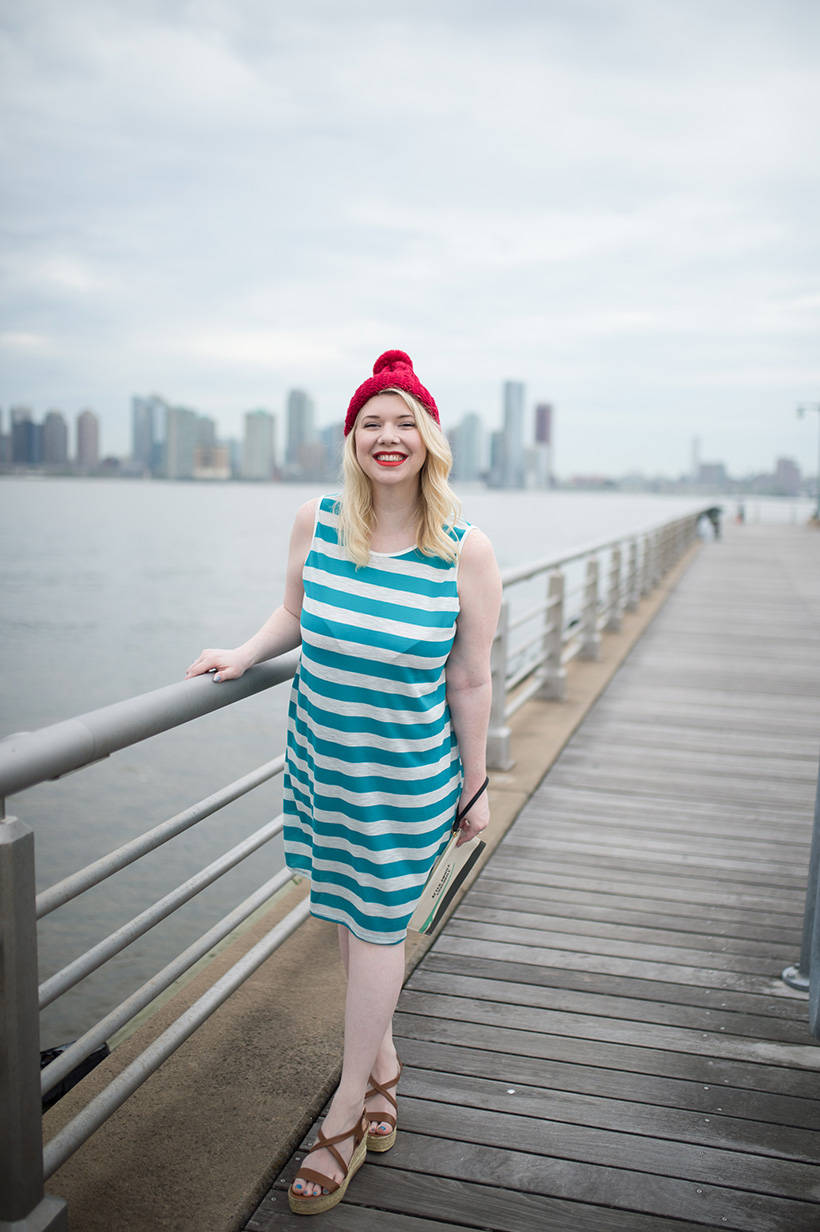 Clearly my love for princessing around is pretty public, but not many people know I also got close with a certain pirate when I worked at the happiest place on earth.

Mr. Smee (Captain Hook’s sidekick from Peter Pan) is pretty close to my heart, so I just couldn’t resist Disneybounding this bumbling pirate! 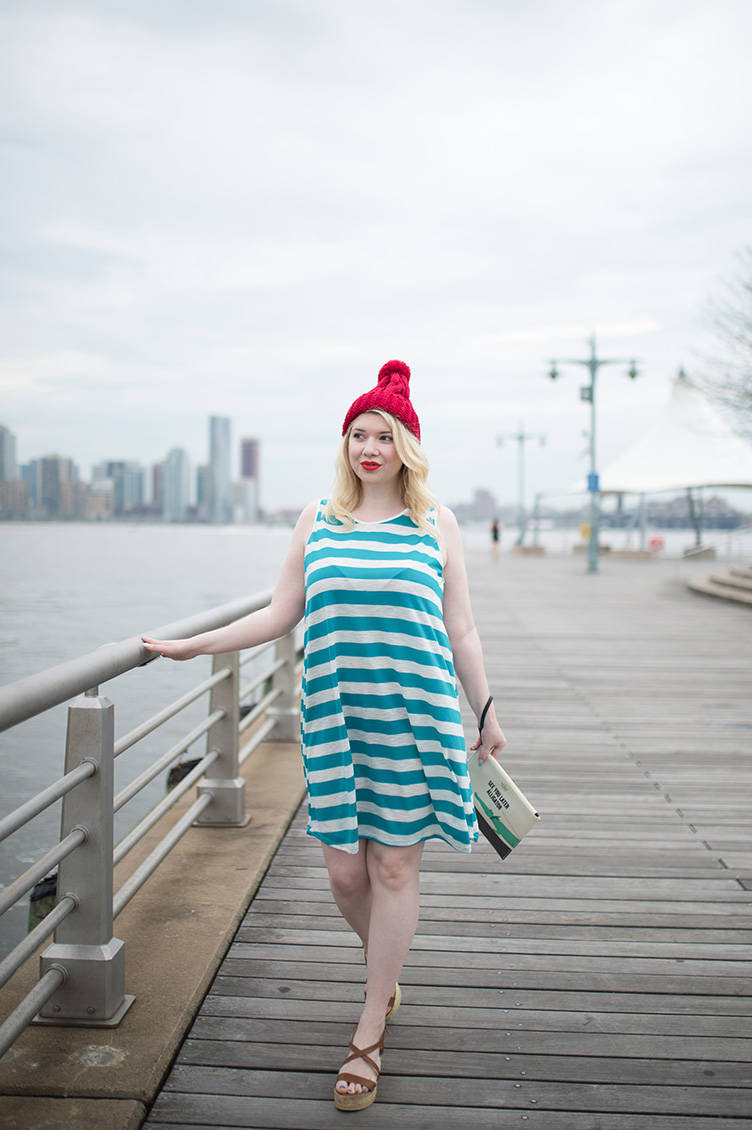 Unique Vintage has the cutest range of Disney-inspired pieces available now, including this Smee-perfect teal striped dress. I also fell in love with this super-cute Kate Spade wristlet. (It says “see you later, alligator” on the other side!) 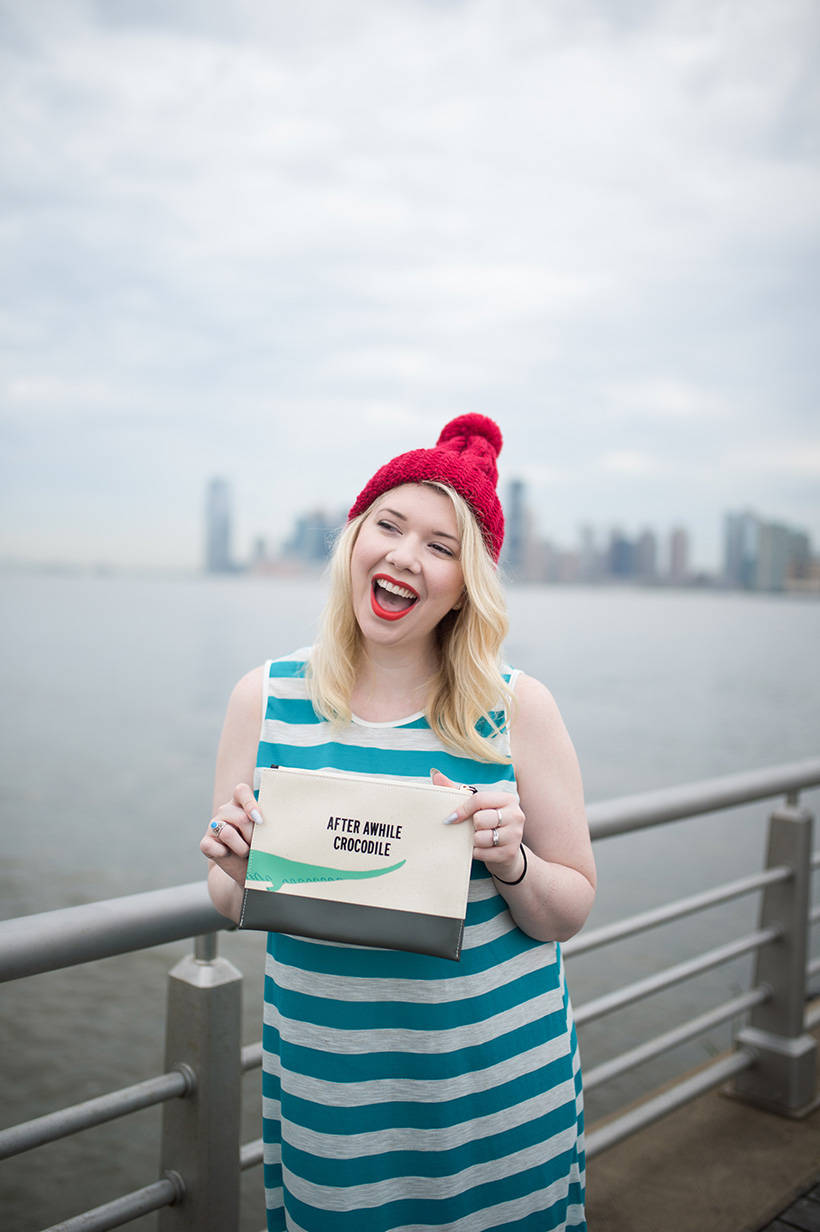 This one was so fun to put together! Goes to show that you don’t need to channel a princess to get your Disneybound on. 😉

Like this look? Be sure to check out my Snow White outfit and my original Minnie Mouse post that contains tips for Disneybounding, too! 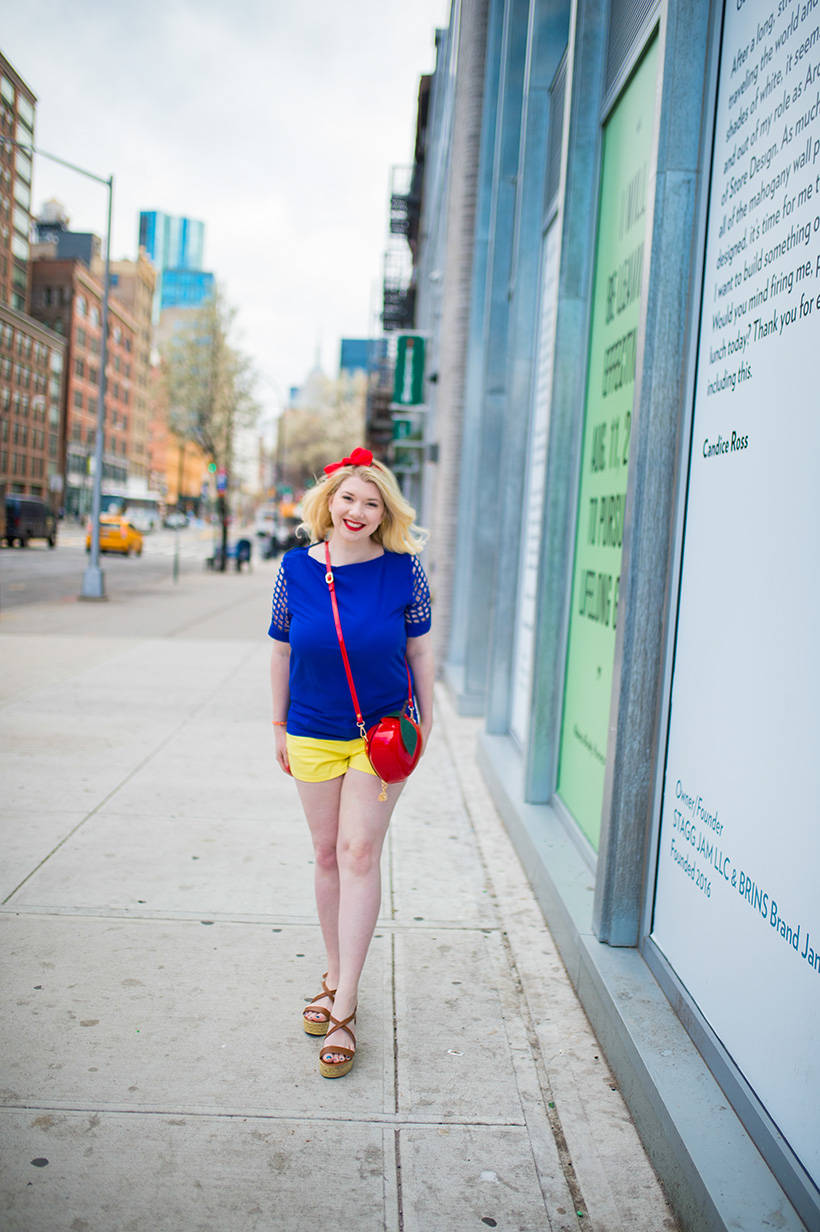 Now we’ve discussed how to Disneybound,  I’m going to keep the series rolling with a few more outfits inspired by the Disney characters closest to my heart! 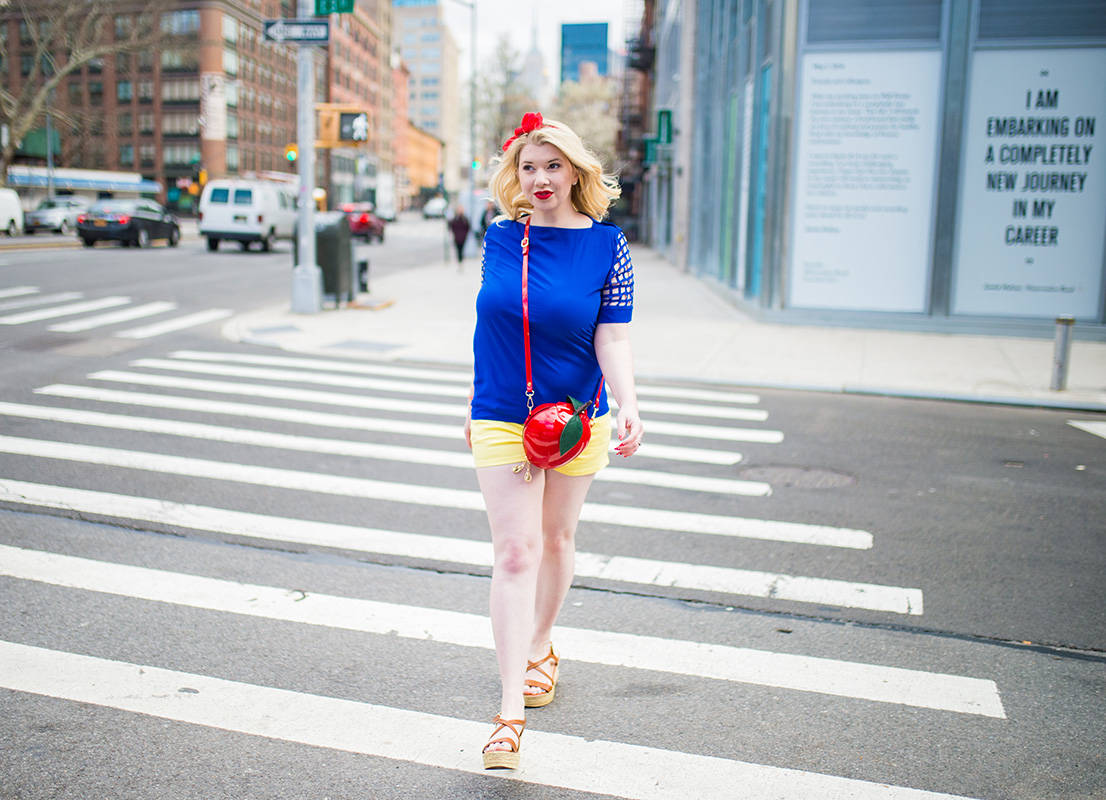 First up, not surprisingly, is Snow White. Decided to give the OG princess a casual summer spin since it’s finally starting to warm up in New York City! 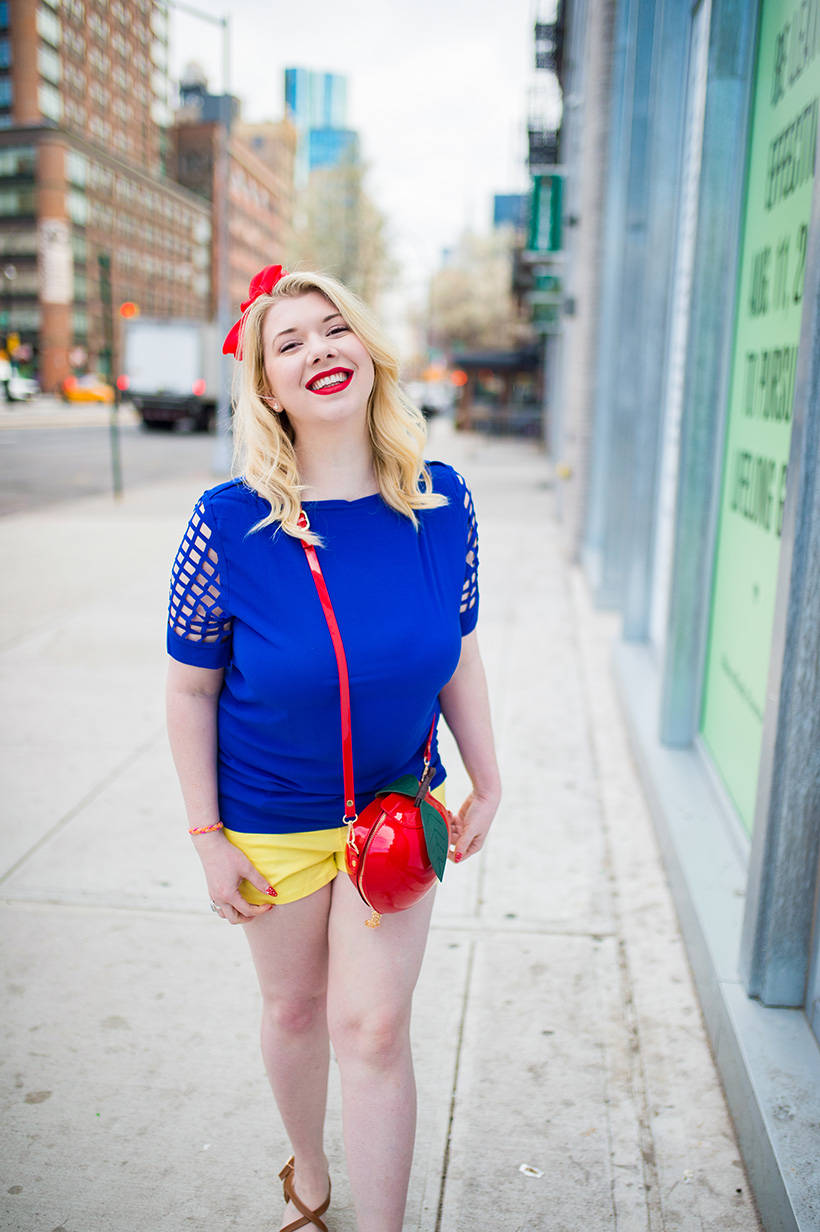 I love the use of the crisp primary colors in her classic gown, so this outfit is totally something I’d wear on regular summer day in the city… or on a trip to Disney World! The shorts are super comfy… and how cute is this apple bag?! 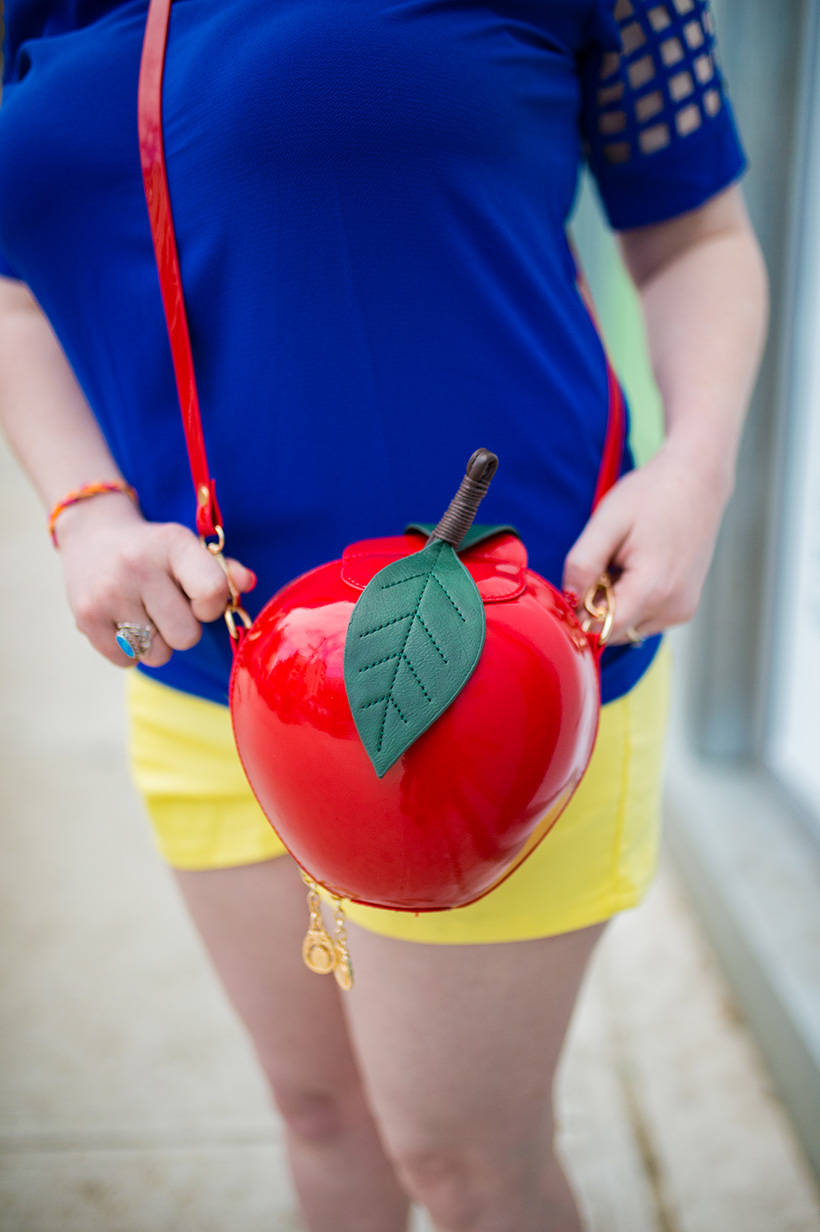 Want to channel your inner Snow, too? I’ve linked the pieces below! 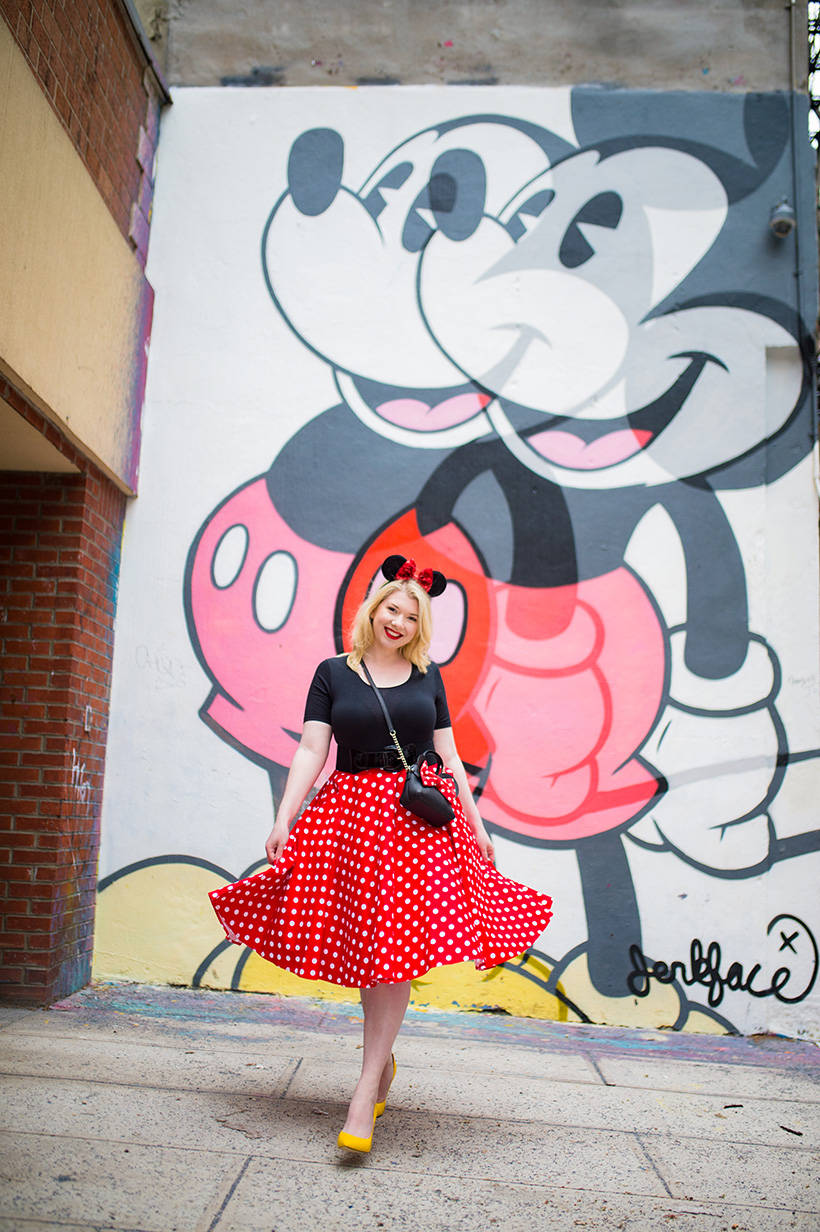 Ok, so it’s not a secret I used to work at Disney World because I basically talk about it all the time. It was one of the most incredible experiences of my life and it really inspired a lot of the work I’m doing now. 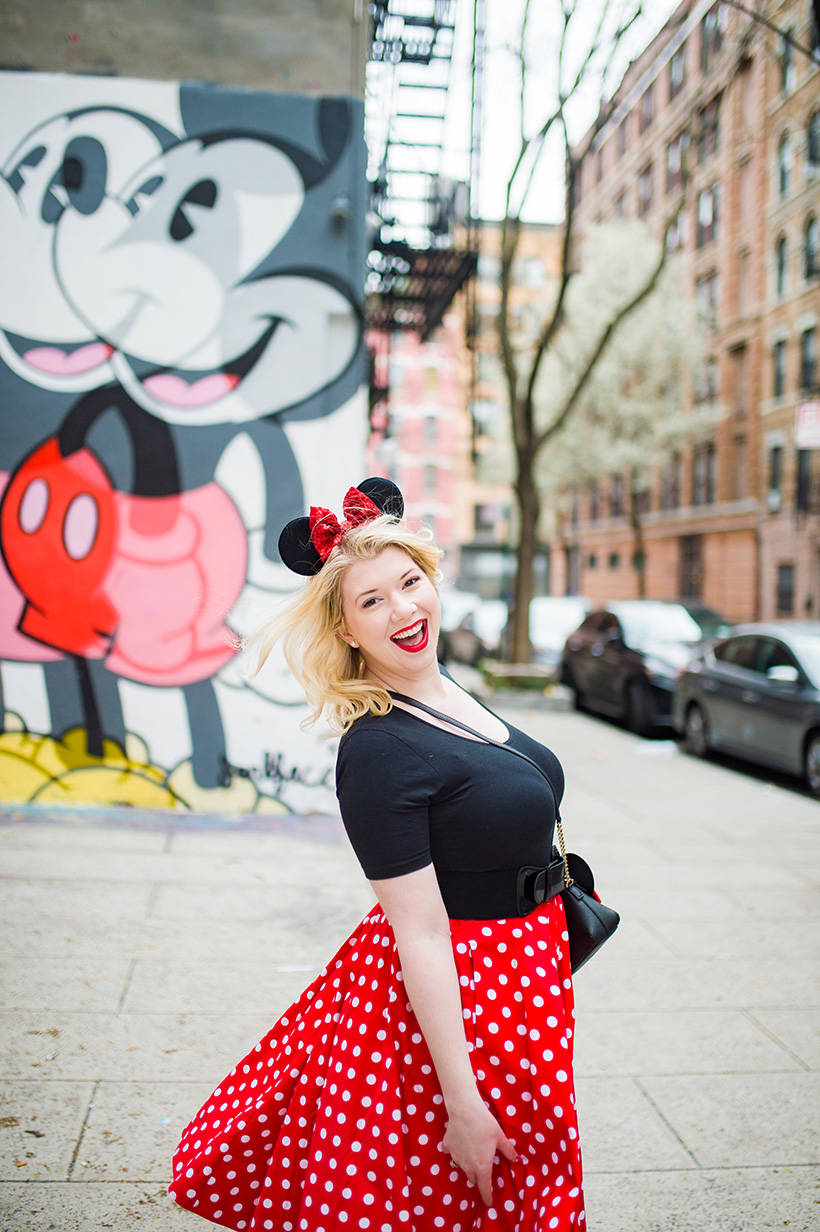 I got into makeup because I fell in love with the art while working backstage and learning from the Disney cosmetologists on set… and eventually fell in love with costuming and wardrobe styling, too! I dabbled in that for a few years at local theaters in Florida before ultimately going down the beauty route, but styling outfits inspired by characters is still something I absolutely adore. 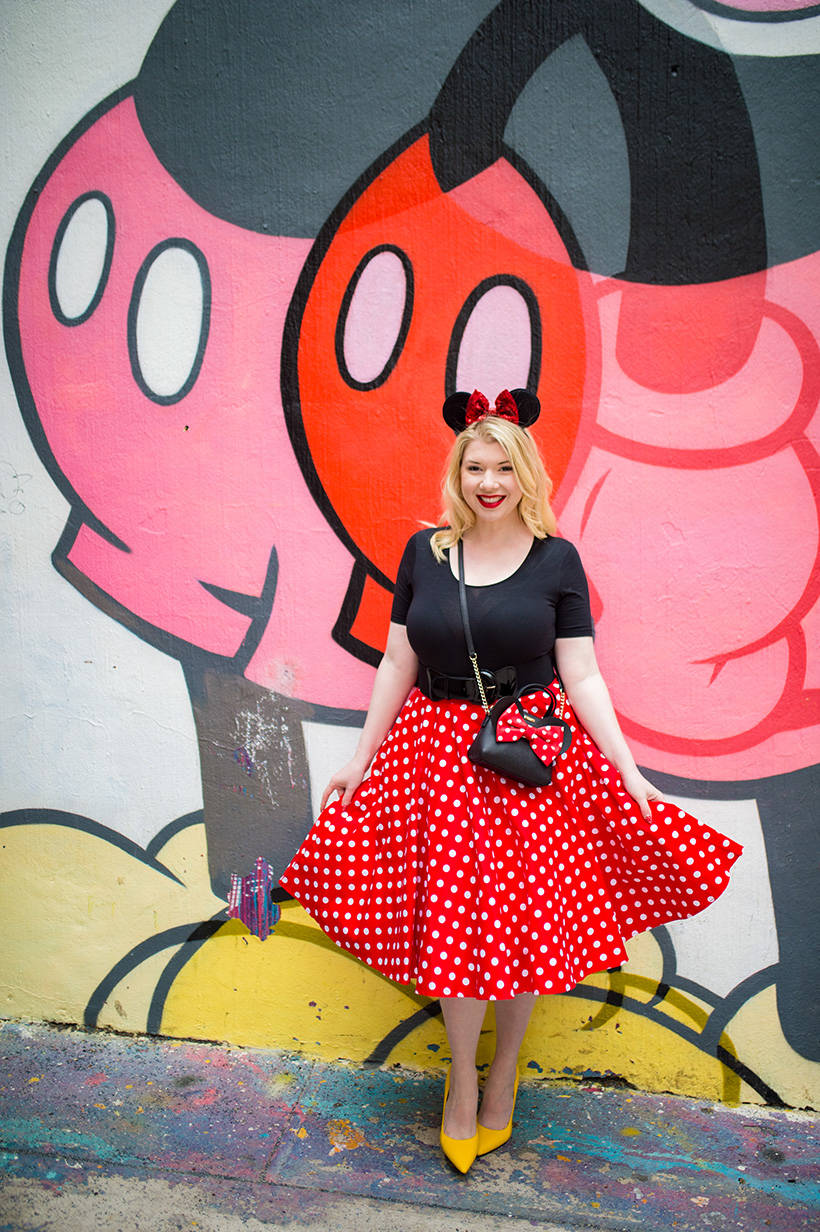 When Disneybounding became a thing, SO MANY PEOPLE suggested I create Disney inspired looks! So, I’m finally doing it. For my first attempt at a Disneybound look, I decided to honor a classic, Minnie Mouse herself. 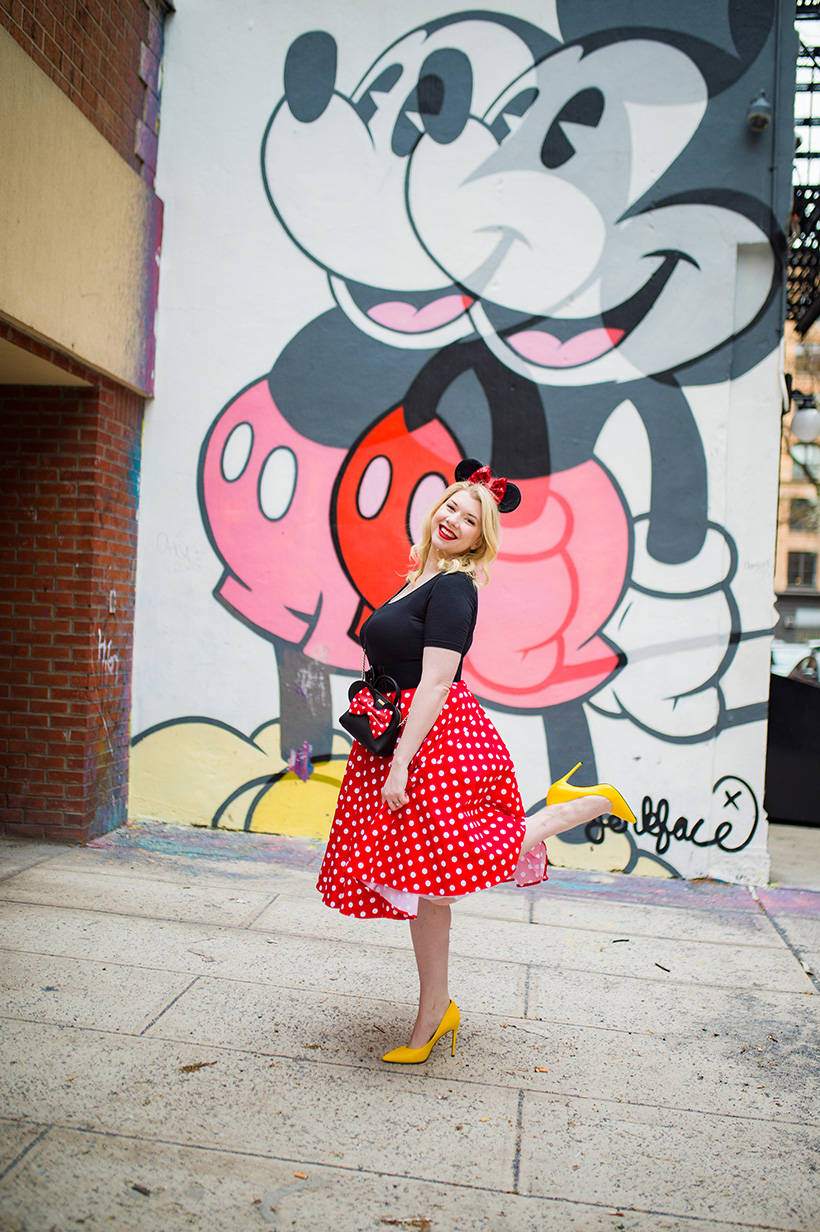 What’s Disneybounding, you ask? The term originated from an amazing blog by the same name. Essentially, it’s using color schemes and thematic elements from different Disney characters to inspire outfits that are more wearable than your standard costume. 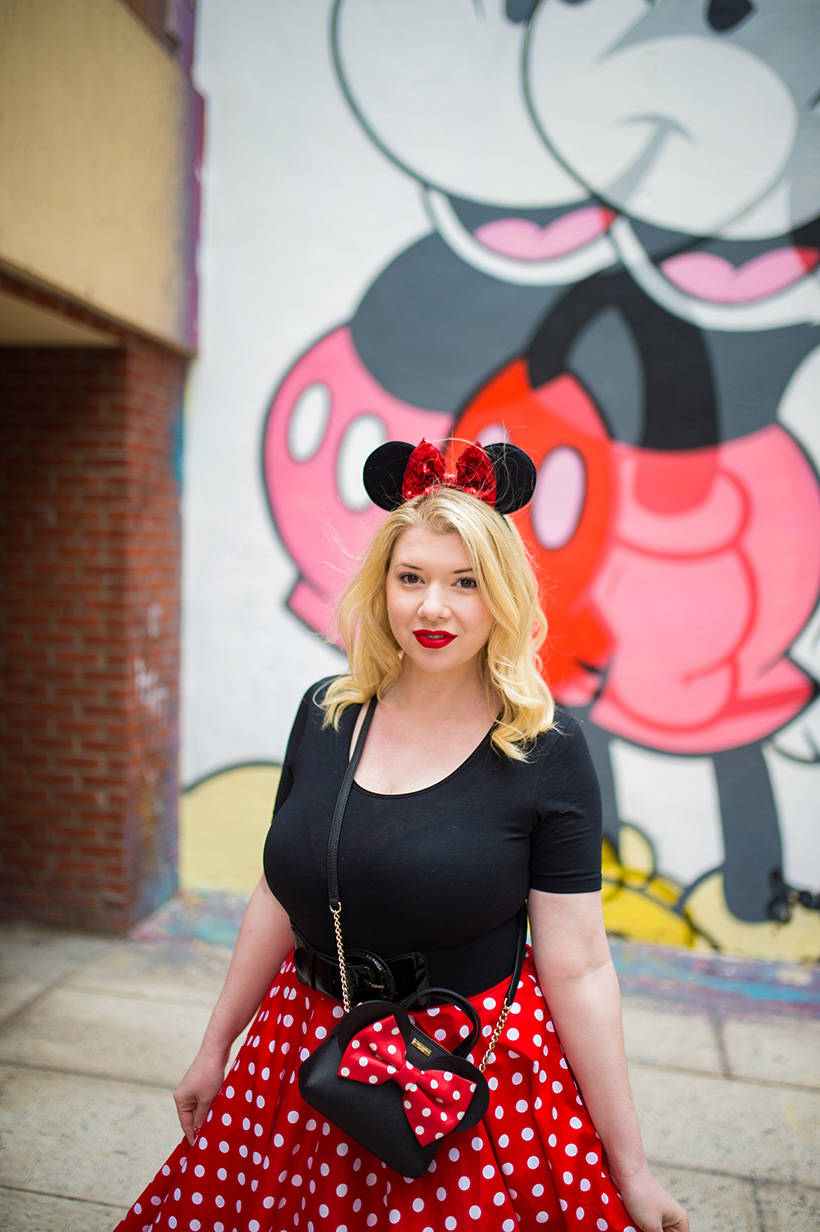 Now, with the rise in popularity of awesome events like Dapper Day, it’s becoming a more mainstream practice by influencers and Disney addicts alike. It’s also super fun to wear one of these outfits to the parks on any given day, no matter the occasion! 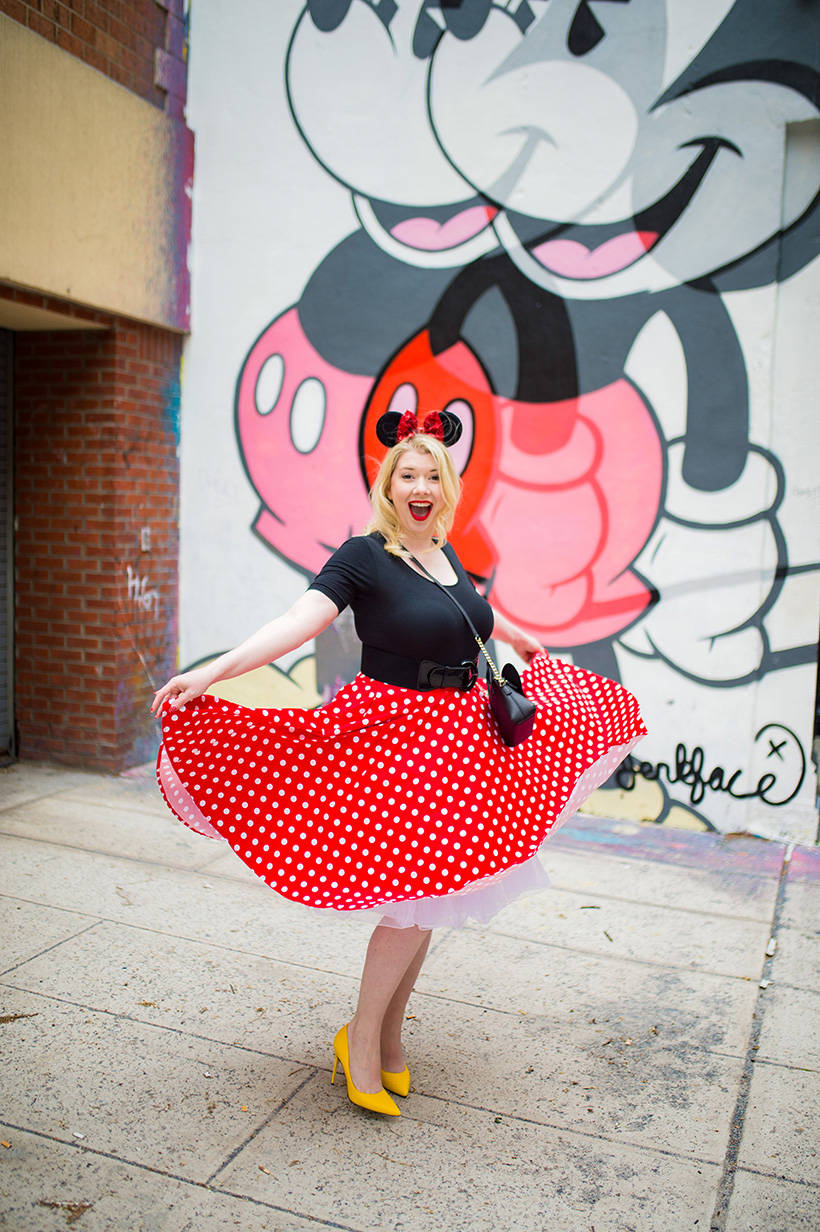 I’ve found that Disneybounding is SO FUN and allows you to stretch your creative muscles and brainstorm killer details that showcase the character. If you aren’t sure where to start, I’ve had success following a pretty standard formula of: Top and bottom matching the color and/or silhouette of the character (like a blue top with puffy sleeves for Cinderella), shoes matching the character’s shoes (like the yellow pumps I wore for this Minnie look), plus an iconic detail (think: Snow White’s bow headband, a purse that looks like the character’s sidekick, etc.) 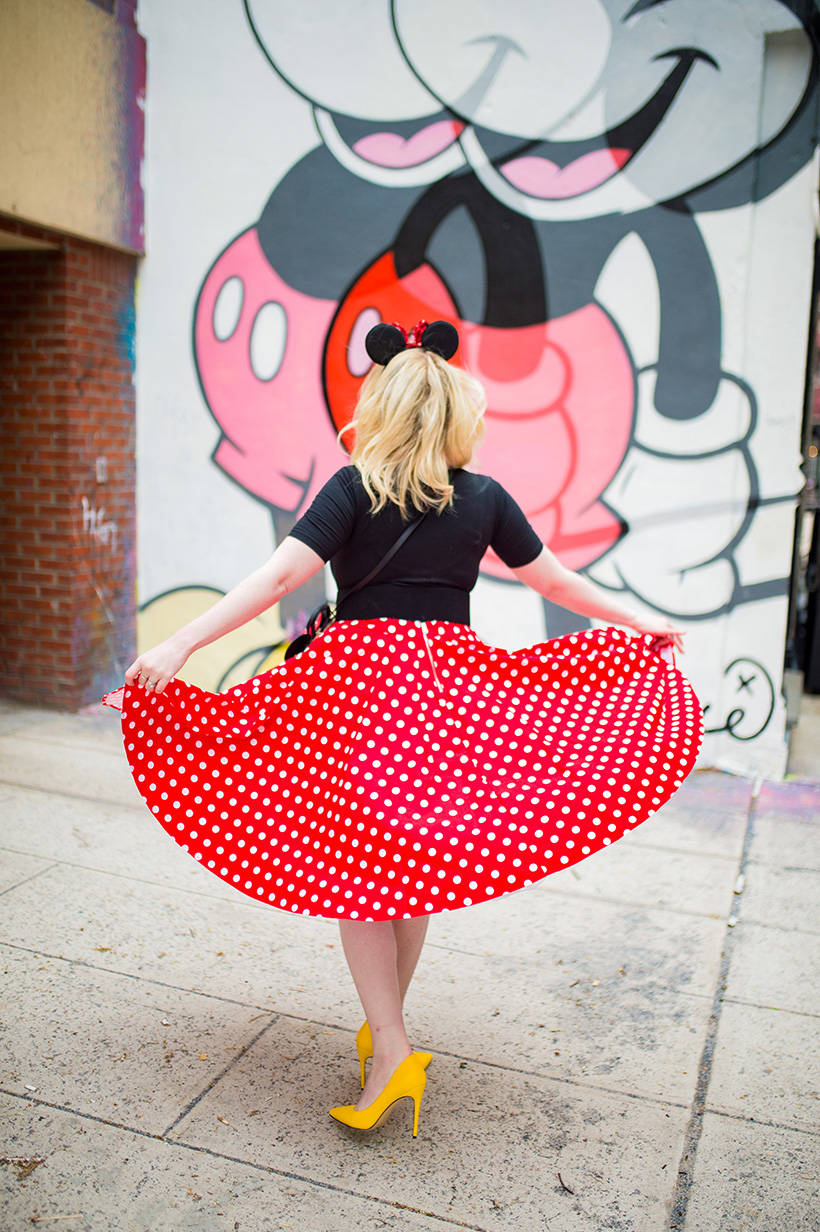 This Minnie look was relatively inexpensive, with the most splurge-worthy piece being this darling Kate Spade purse. 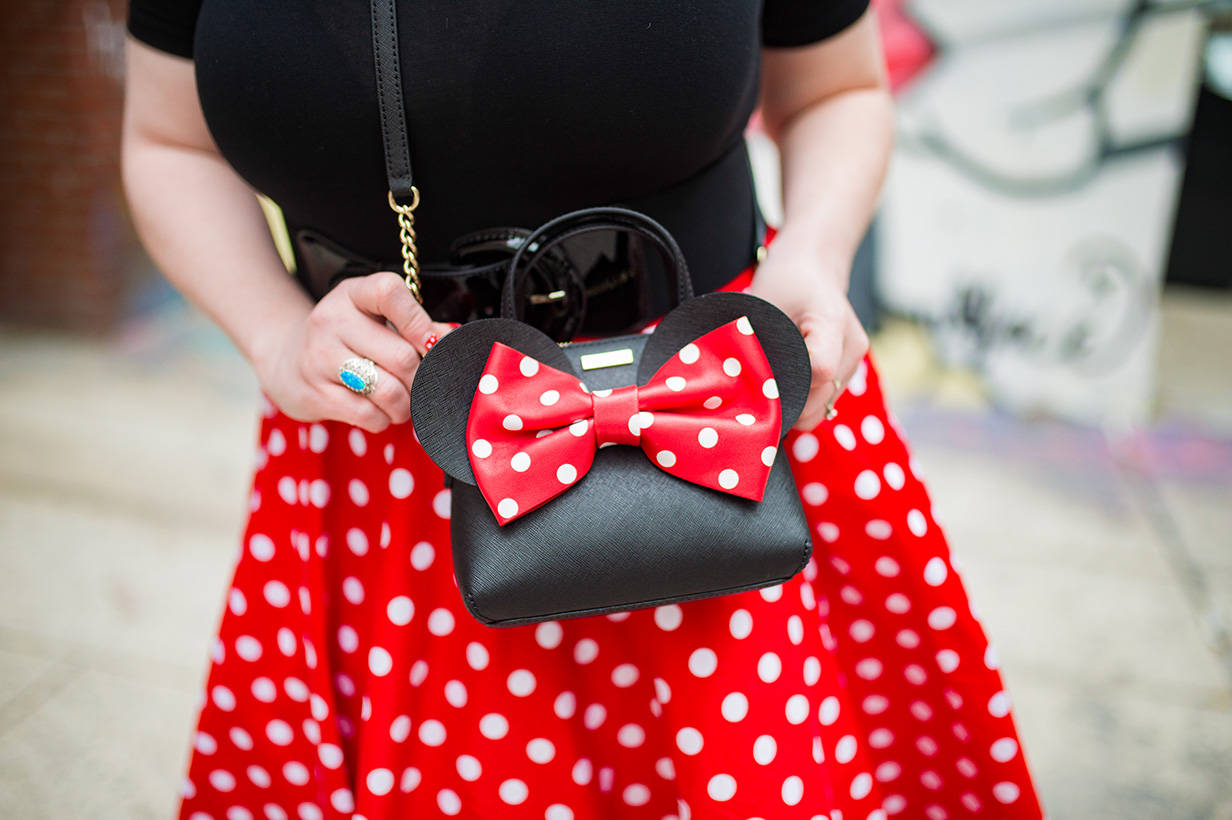 If you want to get that same look on a budget, Loungefly makes a similar one that’s so cute and much more affordable! 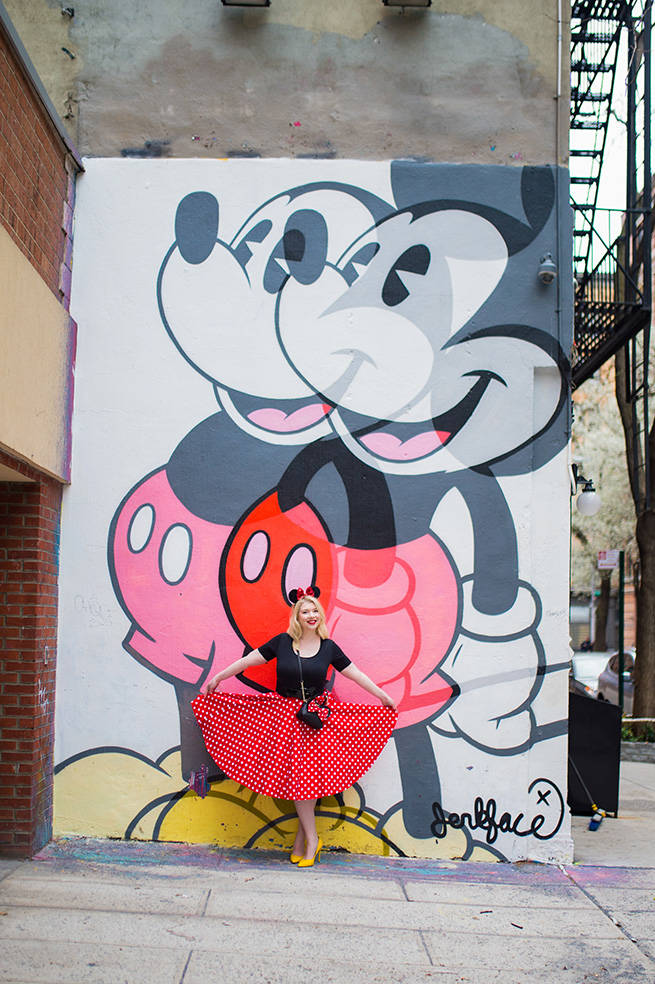 I’ve linked all my Minnie pieces below so you can shop them:

And here are some other handbags that would look perf with your Minnie look:

So, what do you think? Are you into Disneybounding? Would love to see your interpretations of the characters!

Advertise OnMartinis and Mascara
Get Started